Clarksville, Tn — I pulled out of the Iron Horse Inn at 5:30 on Friday morning.  I had already apologized to my neighbors the night before about firing up “black beauty” that early the next morning.  It was a cool, crisp morning and there was a “calm” in the air as I pulled out, on my way to Colorado Springs, Colorado.

Make no mistake about it, I LOVE COLORADO!

Leaving South Dakota took me through the Black Hills National Forest on a winding, twisting highway that was radiating with the early morning beauty of green trees and beautiful county side, with just enough of a “nip” in the air to wear a couple of layers and turn the heated grips on.

There wasn’t any traffic to speak of.  I was more concerned about “wildlife” traffic than I was about another vehicle.  Keeping my eyes peeled for the unexpected visitor, which could have been anything from a bear to a moose, my adrenaline was pumping.  The reality of running into something like that didn’t really sink in until after I had landed in Colorado Springs.

Ever look back on a trip and wonder, “what if?”

Leaving the beautiful Black Hills and entering Wyoming was like someone flipped a switch and all of a sudden, all of the colors changed.   The sign said, “Welcome to Wyoming” and it was a combination of green, tan, brown and gold laid out before me.  My brain was trying to process everything that I was seeing and feeling as I twisted the throttle to catch up with the 75 mph speed limit.

What laid before me was nothing but wide open spaces and a never ending stretch of road that would test the limits of my gas mileage, teasing me to make it to the next gas stop.  Let me tell you, there aren’t many, so when you take off across this beautiful western paradise, make sure you have a full tank.

Once I passed through Newcastle, Wyoming, I had another 90 minutes to make it to Lusk.  I had a half of a tank of gas.  I had topped off before I left, but when you’re used to there being a gas stop at every exit, or at least some civilization every now and then, you tend to get a little anxious.

It was just so calm and peaceful though.  Staring down miles and miles of open Wyoming highway, left only to my thoughts about the past week, and my excitement over what laid ahead.  As I stopped along the highway to snap some pictures, I couldn’t hear a thing.

Then all of a sudden, off in the distance, there was a faint rumble of a motorcycle.  As it got closer, it got louder and I was almost overjoyed that there was a sign of life nearby.

I gave a “thumbs up” to the husband and wife riding “two up”, indicating all was well.  I smiled and wondered if I would catch up with them somewhere down the road?

I did.  They TOO were headed further west to California as we chatted while filling our tanks.

Cutting across Wyoming was one of the coolest things I did on this trip.  Always wondering how my bike was holding up.  Could something go wrong?  What if it did?  Was I prepared this time?  Another flat tire?

All of these things run through your mind when it’s just you and the open road.  I’m a natural “worry wart” I admit it, but the bike performed flawlessly this entire trip, and trust me, I pushed my girl pretty good.  I was proud of my Harley.

The calm and cool ride through Wyoming changed dramatically when I picked up Interstate 25 and hit Ft. Collins, Colorado.  The whole “vibe” changed with the traffic, then making my way through Denver and the return of the “idiot” drivers making their way home during the afternoon rush hour.

The day got hotter as the traffic jockeyed for position until I got to Colorado Springs.  This was familiar territory as I had been here a couple of years ago.  The mountain ranges with Pikes Peak off in the distance is a view that must be seen by everyone who owns a motorcycle.

It was another beautiful day on the Harley and another experience that I was blessed to have.  The people I met along the way, and the friends I would meet for dinner that night just made the day better.

Tomorrow, we would ride with new friends and enjoy the majesty that IS Colorado. 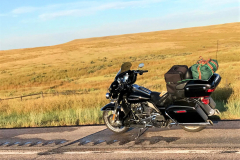 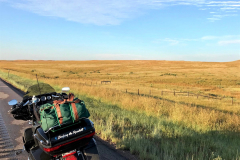 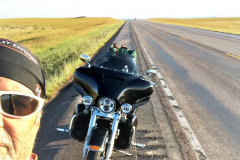 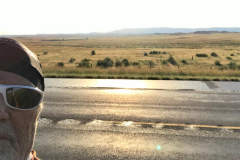 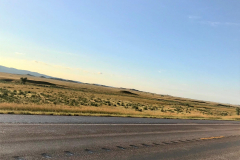