Clarksville, Tn — When I agreed to go to Sturgis, that was all there was to it.  I would spend the week at the Rally and come home.

Somewhere along the way, this adventure expanded into a full blown travel itinerary that included stops in Colorado Springs, and Ouray, Colorado.

A couple of years ago, I met an Army veteran and his wife, Craig and Kim Kotzen.

Craig and I met through a mutual friend, and our love for motorcycles developed into a great friendship.  We’ve traveled several times to the Smoky Mountains where we’ve gotten to know each other better.

I love our Veterans!  I think they’re ALL American Heroes!  Their sacrifice for me is immeasurable and I’m honored to have as many friends who are veterans as I have.

Craig and Kim split their time between Clarksville, Tennessee, where he was once stationed, and Ouray, Colorado.  Until I met Craig, I have to admit, I’d NEVER heard of Ouray.   But let me tell you, I will NEVER forget it.

Here’s how I got there.

The Sunday I left, there was rain in the forecast.  It was the ONLY day on this two week trip that I got rained on.  I couldn’t have been more lucky with the weather on this trip.

I pulled out of Colorado Springs at 7:30, and since the trip to Ouray was only a little over five hours, I wasn’t in any hurry and was going to enjoy this ride.  Even in the rain, it was magnificent!

When I first started riding, I avoided the rain like the plague. Then on a trip back from the Smokies, I had no choice but to ride the rain, and ever since, it’s been no big deal.  If you travel like I do, it’s inevitable you’re going to run into rain.

Leaving the hotel, I picked up Highway 24 west where I found 285 which ultimately connected to Highway 50.  While I believe that ANYWHERE you go in Colorado is beautiful, Highway 50 is amazing.  I had been on some of these roads on Saturday with my new “crew.”

In the rain, I take on Monarch Pass, which is a dandy of an experience even in good weather, but in the rain, I was SO “wired” and ALIVE, I almost peed my pants.  When you have a good grip on the throttle and you’re making perfect turns and taking corners like a BOSS, it’s just a feeling that only bikers can relate to.

I had to keep reminding myself to not get “cocky” and do something stupid.

So, I’m texting Craig my progress, and just basically letting him know I’m ok and he tells me, “stop at the Blue Mesa Reservoir.”  So I’m thinking this is where he’s going to meet me and show me to his house.

He says, “beautiful isn’t it?”

He knew it was something I needed to appreciate without just blowing by it.  I sat there and just soaked it all in, took a couple of pictures, then throttled back up and took off.   There was more to see.

Highway 50 ultimately took me to Highway 550.  550 IS the Million Dollar Highway, but you don’t pick up the mountain road until you get to Ouray.  I passed through little towns like, Vernal, Colona, Eldridge and Dallas.

Ridgeway was just a stones throw from Ouray and from there on in, I just cruised on into town.  Having taken off my rain gear about an hour earlier, the air was cool and fresh and my eyes couldn’t handle all of the beauty.  I was almost there.  This journey which started in my little Tennessee hometown had reached it’s apex.  From here on, I would be turning back home.

The adventure was about to take a couple of interesting turns. 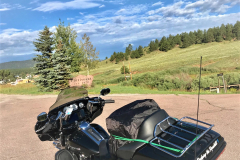 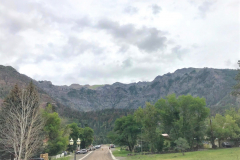 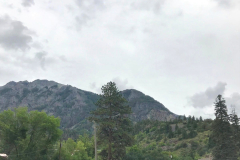 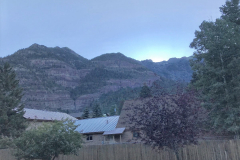 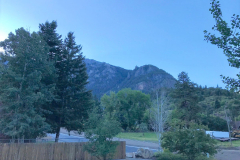